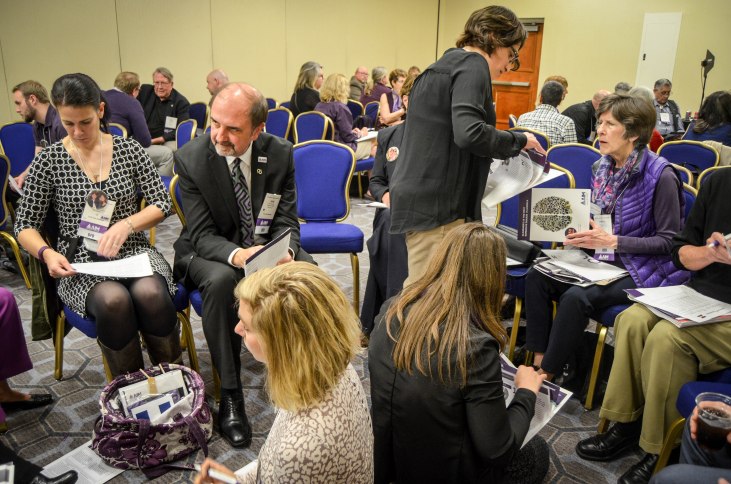 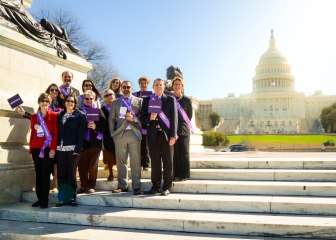 CO Advocates at the Capitol. 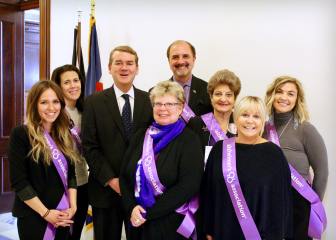 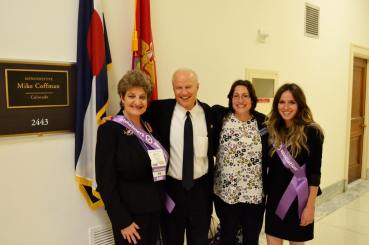 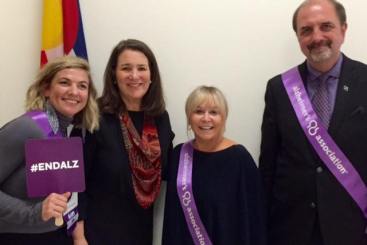 See more photos of the event>>>

April 7, 2017 – A record 1,300 Alzheimer’s advocates from around the country, including 13 representing Colorado, met last week with members of Congress in Washington, D.C., to impress upon them the importance of increased funding for a cure for Alzheimer’s as well as support for palliative and hospice care.

As they have for more than a decade, the Colorado advocates met with all nine members of the state’s congressional delegation to reinforce the message that Alzheimer’s medical research is a bipartisan issue, and they must support adequate funding for the National Institutes of Health (NIH) to advance Alzheimer’s research. This is more critical than ever in light of ongoing budget discussions in Washington, D.C., that include potential cuts in NIH funding.

“The bipartisan support for Alzheimer’s research is there, and the economic argument for the need to find a cure is crystal clear,” said Gene Sobczak, executive director of the Alzheimer’s Association of Colorado. “What we need now is the resolve to make the necessary funding available so that scientists and researchers can accelerate their work to find a cure.”

U.S. Government-funded Alzheimer’s research currently stands at $991 million per year. NIH scientists have projected that a minimum of $2 billion per year is needed for Alzheimer’s research to achieve breakthroughs in developing preventions and effective treatments by 2025. Our advocates requested that Congress increase funding by $414 million this year. Scientists and researchers at NIH already have a plan for how they can spend these funds, which will move us closer to our goal of a world without Alzheimer’s.

The second major “ask” of the delegates was support for the Palliative Care and Hospice Education and Training Act (PCHETA), which would increase the availability and quality of hospice and palliative care for persons in the later stages of dementia. Studies have shown that individuals with advanced dementia enrolled in hospice have better symptom management, lower rates of hospitalization and lower death rates when they are hospitalized.

And those nursing home residents with dementia who receive palliative care at the end of life are significantly less likely to require hospitalization, visit an emergency room or die in a hospital.

“There is currently a shortage of health care professionals trained to provide palliative and hospice care services, and the need for these services is growing as the baby boomers age,” said Coral Cosway, director of Public Policy and Advocacy for the Alzheimer’s Association of Colorado.

The importance of advocacy

The 1,300 Alzheimer’s advocates – the largest group we have brought to the Hill for a one-day advocacy initiative – received training on the advocacy process, including how to make an effective “ask” of their member of Congress. They also received an overview on the current political environment.

In addition to the in-person visits, other Colorado advocates sent supportive messages to each member of the Colorado’s congressional delegation in the week prior to the Forum to reinforce the importance of the upcoming visits.

“The Alzheimer’s Association utilizes the skills and talents of countless volunteers to help individuals and families affected by the disease,” said Cosway, “but our legislative volunteers have the unique opportunity to help all 5.5 million Americans with Alzheimer’s at once by advancing legislation that supports research and improves care.”

Each spring, the Alzheimer’s Association of Colorado meets with legislators in Colorado and Washington, D.C., to carry the Association’s message. Individuals who have an interest in engaging in this process, which helps generate support to change federal and state laws impacting the Alzheimer’s community, please sign up here to receive updates and opportunities to join this effort.