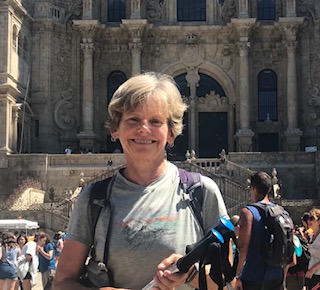 Since 2008, I have been an art class facilitator for the Alzheimer Association, starting in a support group and presently in dementia units in various facilities.

I’ve just returned from my third time walking the Camino de Santiago pilgrimage route in Spain/Portugal as a fundraiser for the Alzheimer’s Association. Combined, I’ve covered 1,100 miles on foot, raising awareness about Alzheimer’s in my discussions with fellow walkers from all over the world. In my related blog and on Facebook, I shared my travels and stories about my MIM artists, and accepted donations for my Walk fundraiser. On the trail, one of the first questions asked is why are you walking, and it is amazing to hear how prevalent Alzheimer’s is throughout the world.

Years active with the Alzheimer’s Association:

I was assistant art director for a city magazine, ran an in-house advertising agency and was the promotions director for a large manufacturing company.

After our second child was born, I began freelancing as a graphic designer, producing advertising materials for various companies.

I began volunteering full-time 25 years ago. It feels good to possibly be able to make a difference in someone’s life. As a volunteer, I feel I am able to give quality time to another person. Often, I am able to give them all of my attention without dealing with time constraints. I lose track of time when I work with people with Alzheimer’s because we both get so involved with the painting or a story or just having a conversation.

My favorite moment/experience as an Alzheimer’s volunteer:

One of my favorite moments as an Alzheimer’s volunteer was working with a woman who was an incredible artist and was always interested in the techniques of painting. She was very dedicated to her work. Her memory would be sporadic at times, sometimes telling me stories about her son serving in WWll.

Once she painted a mountain scene that depicted a brightly shining sun. After she was finished, she talked for an hour about how today she could paint this scene because “a man’s load had been lifted from her shoulders and replaced with just a woman’s load.” She was smiling and said she was free. That shows just how powerful art can be in retrieving feelings that possibly made a huge difference in her life.

How what I do makes a difference:

With Alzheimer’s, I’ve watched a person with the disease come into class restless and unable to sit still, and see them become very calm after starting a painting. It doesn’t matter whether it’s a few brush strokes or a detailed painting, it shows the power that art has on brain function. It can reduce stress and create a happy mood that may not have been there. Art has the ability to open up a time in their life that has possibly been long forgotten. Even if it’s for a moment in time, that moment can provide a smile, or a story, or just a feeling of contentment that they may not have had.

I have been involved over the years as a team member or co-leader for Habitat for Humanity, building homes around the world, including one in Argentina that stands out to me. I took a photo of the new owners: the grandparents, parents, son and daughter who would live there. They now had a 2-bedroom home with an indoor kitchen. I realized as I looked at the children that someday they would be the grandparents in that same house. That’s giving generationally. That’s when I realized just how important volunteering is.

Currently I am on the board for a medical clinic serving in an impoverished area of Ecuador, and I have spent time teaching school and building homes in the Andes Mountains of Peru.